These photos are from a project called the "500 Tea Drinkers" by Shanghai based painter and photographer Yang Hui. The photos were taken in rural Zhejiang and Jiangsu Provices in 2005, though they could just as easily have been taken in 1965. About the project Yang Hui says "those old peasants ... embody a basic truth. To me, they represent living arhats." The arhats to which he refers are early Buddhist disciples said to have achieved Nirvana. They, by some tradition, also number 500.

If a picture is worth a thousand words then what we have here is a whole book about drinking tea... 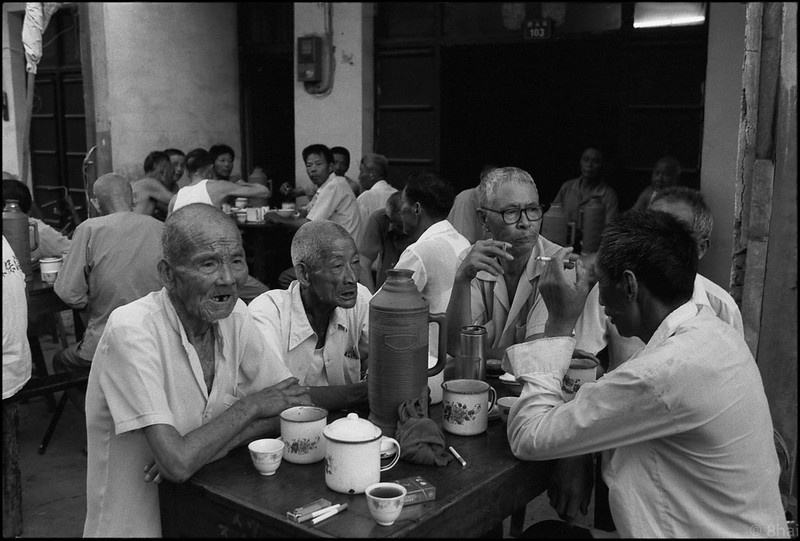 Take some time, put on some nice instrumental music and start looking through these photographs– take some time with those that interest you. Don’t rush because that’s exactly what most of these people were doing– they were not rushing. Even the fellow carrying things for sale down the street wasn’t rushing. But the people not rushing the most are those sitting at tables having tea. 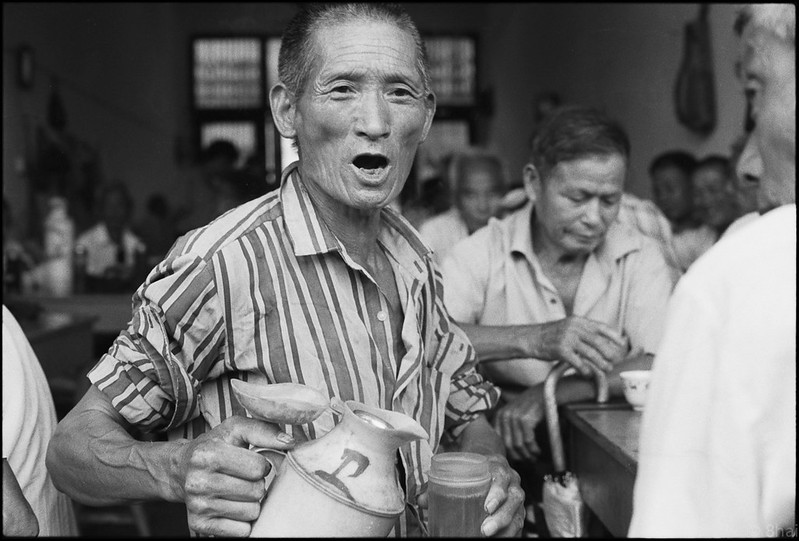 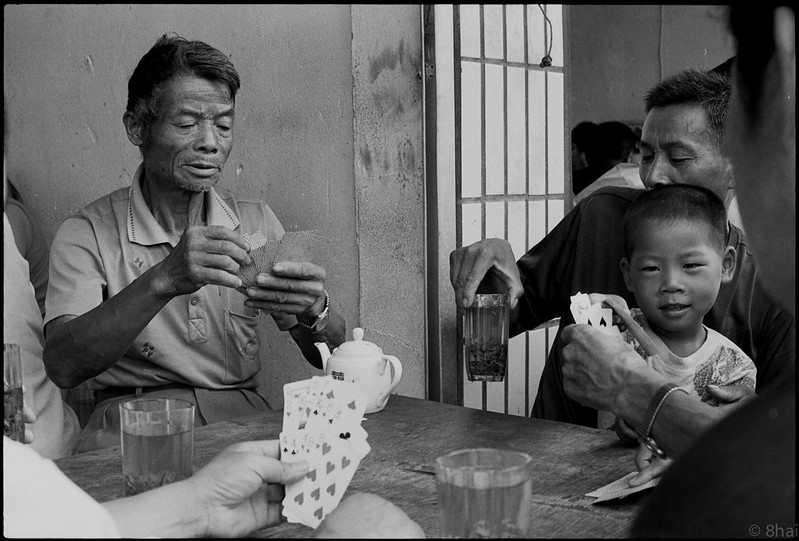 Most tables have one large metal covered, insulated glass lined thermos, which holds boiled water. The tea drinkers typically bring their own tea, so they’re just paying a modest sum for that, the water, and not buying the tea there. These are not well off people, and they are thrifty. 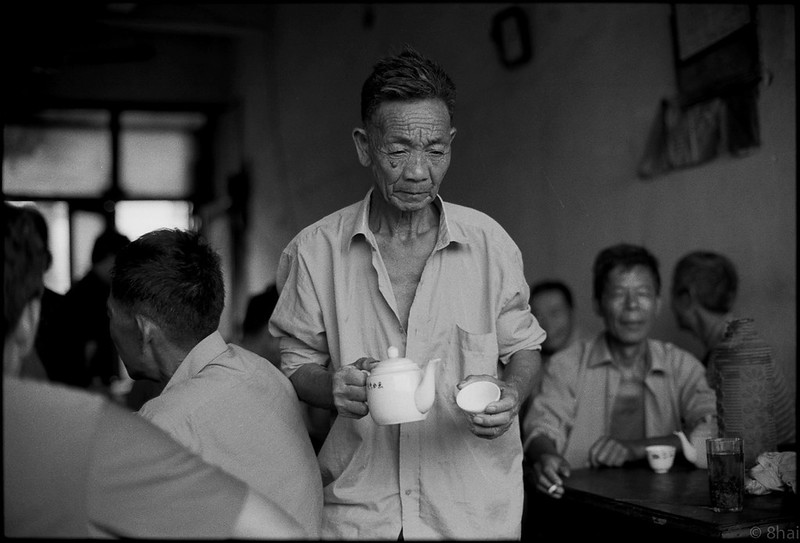 They bring tea from home, sprinkle some into the bottom of the porcelain coated metal cups, and add boiling water.  The cups tend to be small, so the tea can be easily consumed without having time to grow cold. (Cold is pretty much anything south of scalding.) If the talk at the table gets too involved and the tea goes undrunk too long, then the brew will be tossed in the street, and new boiling water added to the leaves at the bottom of the cup. 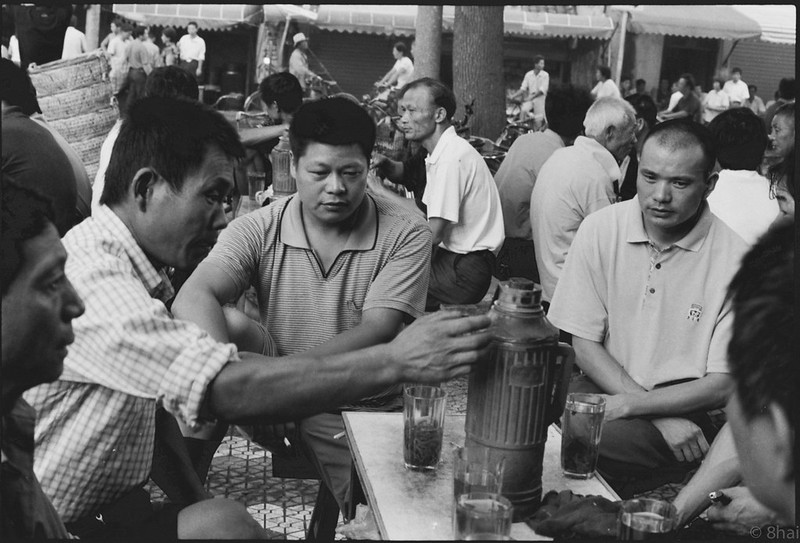 This activity isn’t about special tea, at least not usually, and it’s not about thirst, and it’s not about hydration. It’s about the socializing, and the tea is the hook, the reason, the excuse, the justification. People like these wouldn’t be likely to say “Oh, I’m just chatting with my friends,” because that sounds a little too carefree, a little bit too indolent. But “having tea with some friends,” well that sounds a lot better. 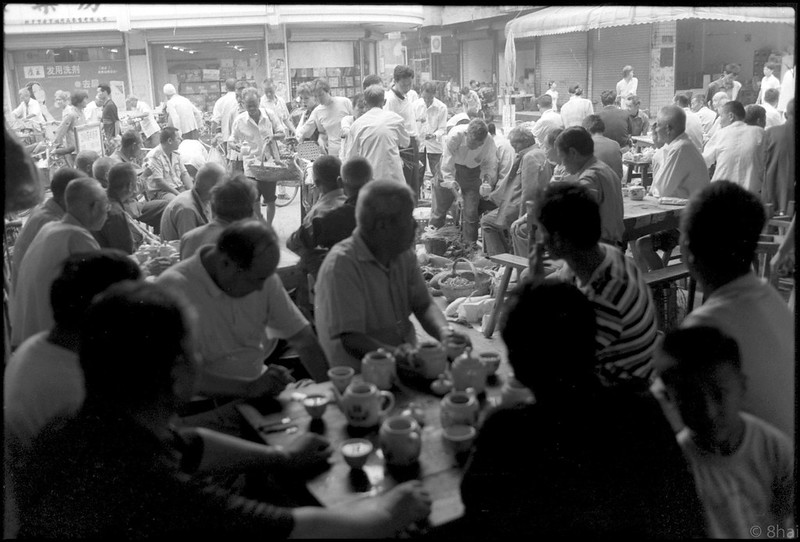 You can see that it’s hot– the men are mostly wearing either undershirts or light cotton shirts unbuttoned. But they’re drinking tea as hot as it comes. Iced tea is unknown on these streets and if offered would find few takers. Hot tea is, according to the prevailing view, cooling. Tea is hydrating, and hydration leads to sweat and sweat leads to cooling. Whereas iced tea would lead to all manner of ills, starting with an upset stomach. Cold drinks, cold food, for these people, is very rare indeed. 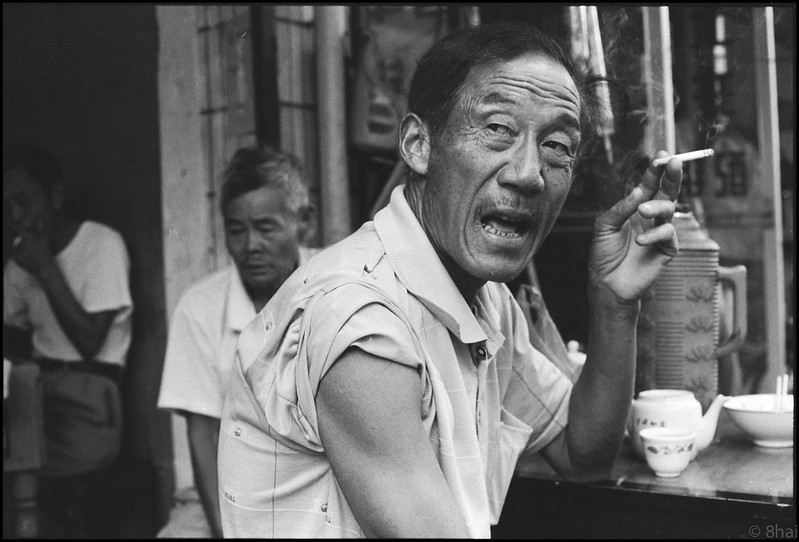 Tea, sitting and having tea with your friends, acquaintances, even strangers, tea provides a much needed break. Look at these guys– they have not had easy lives. They’ve spent most of their time out of doors and that time has not been easy. They enjoy few physical comforts and they don’t eat very much. In terms of ingesting, tea is the one constant, a companion every day of the year. The day begins with tea, tea is the work friend, the afternoon break, the evening comfort. Tea is something all these men know. Those discussions you’re looking at, they can get pretty rowdy, these people do not agree about everything, not by any means, but tea is a unifier, tea is not just something they could all agree on, it’s ubiquitous, so much so that it’s not even a question– everyone drinks tea. Maybe he likes his stronger than you, and that fellow prefers it weaker, but they all drink tea, as automatically as they breathe... 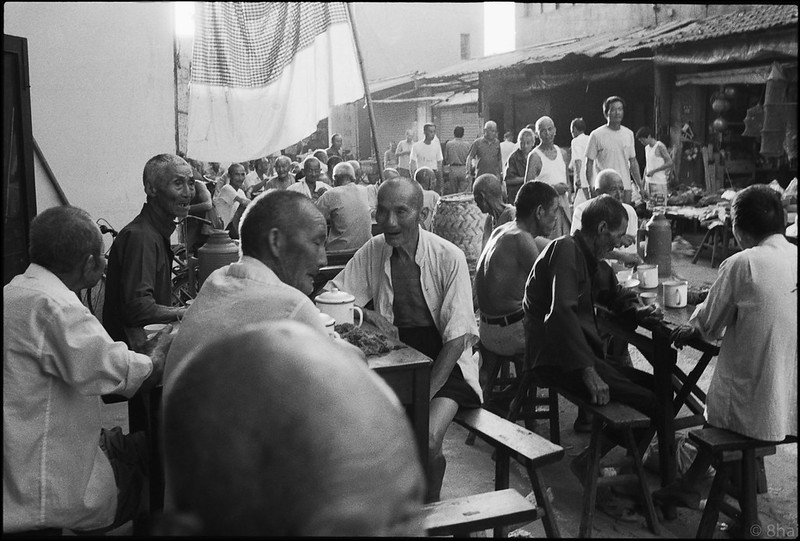 I’ve spent many hours at these tables. Different in so many ways, I’m peppered with questions– where am I from, is my wife Chinese, how many children to do I have, how much money do I make, what work do I do, do I like to eat bread, how do I feel about chopsticks, about Chinese food, about...tea? After all the answers then the conversation often turns to tea. The tea *these* people drink is very good, very good for you! (Wherever you go, this is how it is.) But don’t people where I come from drink coffee, no beer, no whiskey! The men start to argue about the question and when it finally comes to me I try to explain the custom back home, a place removed from these tables by thousands of miles and in a way by many years. The now back home is not quite the same now as it is at these dusty tables in this hot air, with these large, heavy thermoses filled with piping hot water, water that waits only to be released from its dark prison and mingled with a sprinkling of small dark leaves of a plant first described simply as “the bitter herb,” ages and ages ago...  We drink our tea, these men, or rather men like them and I, and even with the heat and the sweat eventually I have to make my excuses and head off. Maybe I’ll be back, maybe I’ll have somewhere else to go. But it’s been two or three or four hours and I probably have something else I need to do. Thanks for the tea, I’ll say, and they’ll call out, come back again! We’ll still be here!

All images copyright Yang Hui and used by permission.